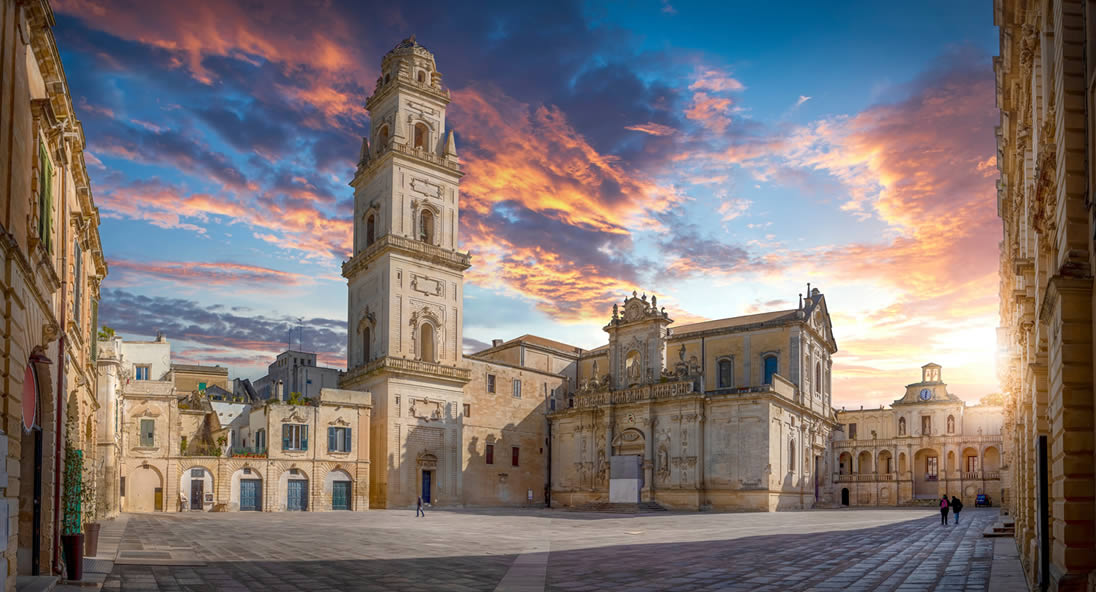 Puglia is not only famous for the outstanding beauty of its natural landscape, made up of olive groves, infinite orchards and lovely beaches. Our charming Puglia tours in Southern Italy will lead you through the most beautiful examples of both Baroque and Romanesque architecture you can find in the region: a dreamy itinerary for any history and art lover!

You are about to find out the best artistic spots in Puglia, where every alley, street and square will surprise you for its wide range of architectural feats, from Baroque richness to Romanesque linearity. Are you ready to travel with us? Your journey into art starts now!

The Salento peninsula is maybe the most distinctive area of Puglia where visitors can really enjoy the architectural achievements related to the artistic phenomenon of “Barocco Leccese”, which developed in Lecce, and then spread all over the high heel of Italy resulting in luxurious buildings and façades which stand out for their sensuous richness. Let’s start our tour through the most beautiful Baroque cities in the deep south of Puglia!

#1 Lecce: the Queen of Baroque

When planning your Puglia tour in Southern Italy - discovering the beauties of Baroque style - a trip to Lecce is definitely a must! Did you know that the city is also known as the Queen of Baroque? Pay a visit to the city and you will easily understand why! Just stroll around the historical heart of Lecce and reach Piazza del Duomo where you will remain speechless admiring the imposing Cathedral, a wonderful example of the decorative pomposity in the city. Don’t miss another breathtaking Baroque masterpiece: the Basilica di Santa Croce (The Holy Cross Basilica) whose façade is decorated with the typical artistic elements of that time, such as gargoyles, festoons, columns, animals, flowers and human figures.

In the heart of Salento there is another precious Baroque gem. Don’t miss the chance to visit Nardò, an ancient Roman village, originally called Neretum, which overlooks the bay of Porto Selvaggio and is surrounded by a wide pine forest where you can sit in the shade on those muggy summer days. A beautiful example of Baroque architecture in Nardò is the Church of San Domenico which stands out for its infinite amount of details, statues, sculptures and ornaments on the façade, thanks to the well-known Napolitan architect Ferdinando Sanfelice who gave a crucial contribution to Baroque style in the city with his works. 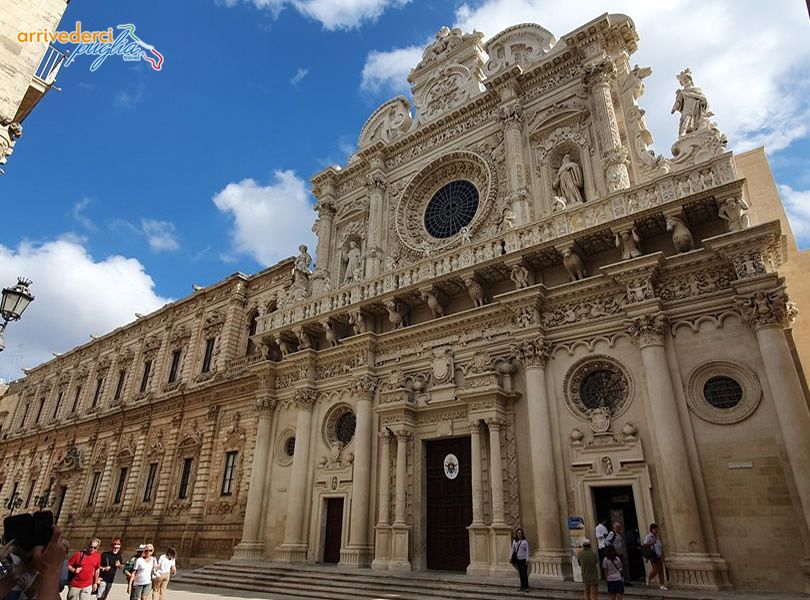 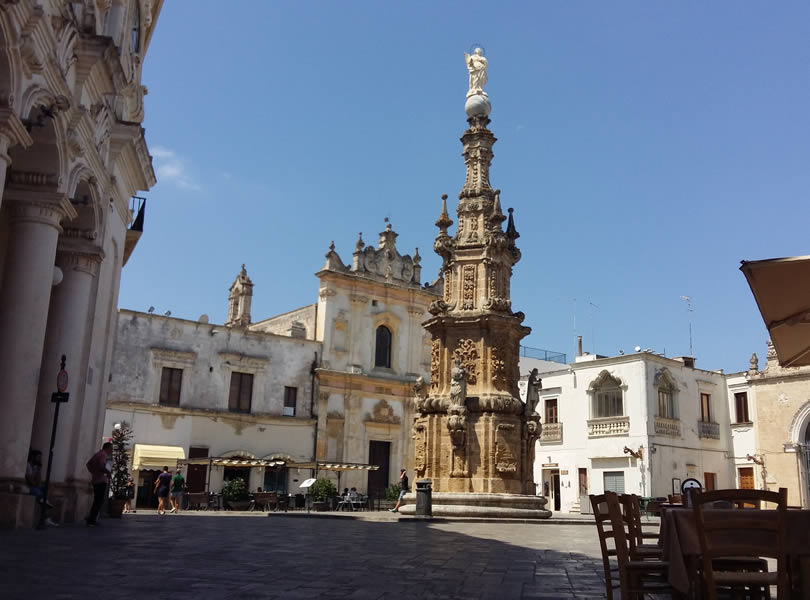 Once you have completed your journey through Puglia’s Baroque masterpieces, you just need to start your trip to the most beautiful examples of Romanesque style, which flourished in the region between the 11th and 13th centuries and acquired such peculiar features, that it came to be known as Apulian Romanesque.

#1 Trani: the stunning cathedral by the sea

The medieval city of Trani is a network of streets and picturesque alleys. Just head to the north end of the fishing port and you will come across the striking beauty and majesty of the Cathedral. You will be impressed by its surprising location just by the deep blue Adriatic Sea, due to the fact that it had to be the most visible and recognizable building of the Apulian coast for both sailors and enemies. Its creamy white limestone façade with a big rose window in the centre, together with the high bell tower of 59 metres, leaning against the right nave, make Trani’s Cathedral one of the most fabulous examples of Apulian Romanesque in Italy.

On your Puglia tour in Southern Italy, remember to stop in Altamura, an inland village in the province of Bari that offers many tourist attractions, starting from its beautiful Cathedral of Santa Maria Assunta built in 1232 by Frederik II of Swabia.
The building is the perfect mix of different styles. On the façade, you can easily spot the typical elements of the Gothic-Romanesque style, especially the doors and windows with the traditional Gothic pointed arch, while Romanesque’s linearity prevails in the structure and in the two bell towers. Don’t forget to go inside where the original frescoes were completely replaced by Baroque decorations. Before leaving the town, stop by a bakery and try the crunchy Altamura’s bread, naturally leavened bread made with durum wheat flour from the area. A real Italian delicacy! 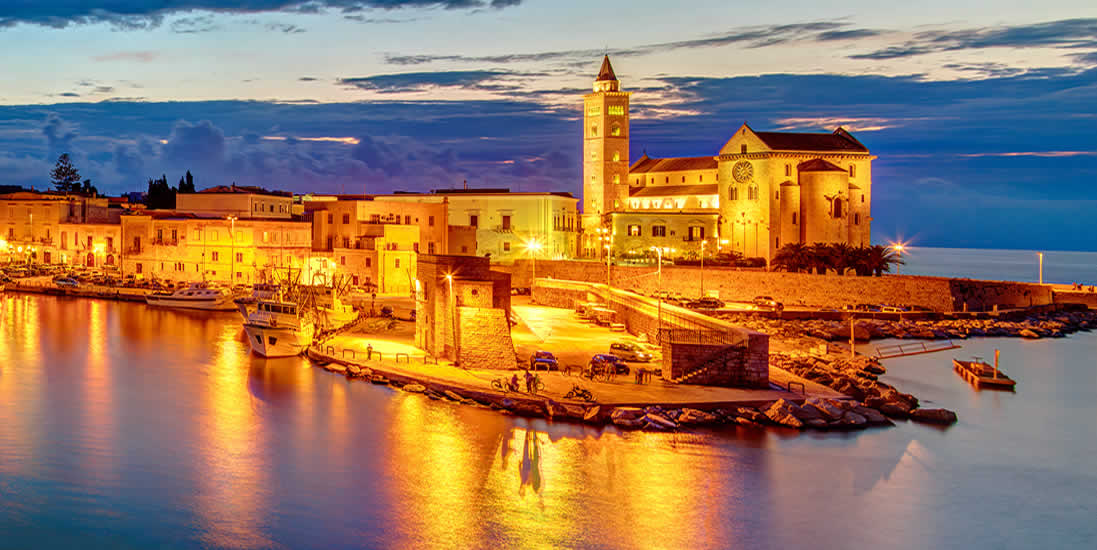 This is just a foretaste of the many artistic and architectural beauties of Puglia.
Discover more about our Puglia tours in Southern Italy to find the one that best suits you!