Tours to Puglia: get to know some tips & curiosities about two Apulian gems - Otranto and Castel del Monte UNESCO site

We have chosen two stunning Apulian gems that you can admire and discover on our tours to Puglia. Tradition, symbolism and eastern influences are the common thread that leads you through a journey from a maritime port, Otranto, to a fortified castle in the Apulian countryside, Castel del Monte. These incredibly overwhelming places stand out for their magical atmosphere: for each of them, we have summed the main tips and curiosities.

Otranto - the Bridge between the East and the West

Otranto is located on the east coast of the Salentine Peninsula. It is the eastern point of Italy, where in a perfect sunny day is it possible to see the other side of the Adriatic Sea with the North of Greece.
This sea hamlet will amaze you: a bridge between West and East, Otranto houses hundreds of years of history and a millenary culture, an unprecedented culinary heritage and ancient craft work traditions. The fortified village is harmonically embedded in the shoreline, creating a real terrace overlooking the sea. Plunge in the maze of alleys of the historical center, and discover its streets teeming with life and flavors. Admire how life unfolds and live it like a local. From Otranto, you can also reach the jewels of Apulian countryside and take a cooking class in an amazing farmstead called Masseria.

Here you can find some tips and must-sees in this amazing maritime city:

The maze of alleys in Otranto

Get lost in the historical center of Otranto. Wandering along the village walls that enclose the historical heart offers a unique panorama on Otranto gulf, especially at sunset, when the houses take on a pink and orange hue. Go inside the beating heart of the historical center, a labyrinth of picturesque streets where you can stop and admire local handicraft and taste some specialties in the typical maritime “osterie”. Otranto is a place to live and taste slowly, one step at a time.

The Martyrs of Otranto

Otranto was an important trading port in ancient times and even in the Middle Ages until 1480 when a fleet of Turkish warships besieged the town.
It was the Turk's bold plan to subdue Italy and France; but they were caught unaware by the unexpected resistance of Otranto's population, who held them at bay for 15 days.
Eventually, the Muslims broke into the town and ordered the Christians to convert to Islam. Upon their refusal, the Turks stormed the Cathedral and killed the Bishop and everybody who had sought refuge within its walls. About 800 survivors were beheaded for having refused to deny their faith. The Church declared them martyrs; their remains are now preserved in the Cathedral of Otranto.

The grandiose floor mosaic of Otranto

The Cathedral of Santa Maria Annunziata is where are stored the martyrs of Otranto relics. The great attraction of this church is the grandiose floor mosaic created between 1163 and 1165. The mosaic is one of the most important examples we have of 12th-century art.
Covering 600 square meters (6.500 square feet), the mosaic is a depiction of the Tree of Life with images decorating its spreading branches to represent the theological itinerary of salvation, from original sin to redemption.

Castel del Monte - a rock crown immersed in the mystery

A rock crown lying on a hill in the heart of the Murge plateau in Puglia. A jewel that stands out in the countryside at 540 meters above sea level. A real must-see for our tours to Puglia. We are talking about Castel del Monte, a fortress commissioned by Frederick II in the middle of nowhere around 1240 and included by UNESCO in the World Heritage List in 1996.

This castle is renowned for being a universal example of medieval architecture which combines different styles: the Romanesque style at the entrance with the imposing lion statues, the Gothic shape of the towers and the classical features of the inner decorations till the gentle Islamic trims of the mosaics.

If you pay attention, you’ll notice one thing: the number eight is everywhere. The plan is octagonal, there are eight towers, and also the courtyard was said to be octagonal. Pure geometric and mathematic rigor are the foundations of this complex. Eight is the number of cosmic balance, which turned upside down reflects the infinite, and the passage from an earth dimension to a spiritual one. The octagon is the symbol of the union between the earth (square) and the sky (circle).

Symbolism is pervading everywhere, mystery has been sweeping across this complex for centuries. The location of the complex was actually painstakingly studied to be raised in order to create light and shadow effects based on different times in the year, especially on the days of solstice and equinox.

Symbolism is connected to Astronomy and Esotericism as well. Researchers think that Castel del Monte was built for reasons that were not known to everybody. Some researchers say that this construction is inspired to Pyramid of Cheops, since Frederik II was totally intrigued and fascinated by the East culture and history. 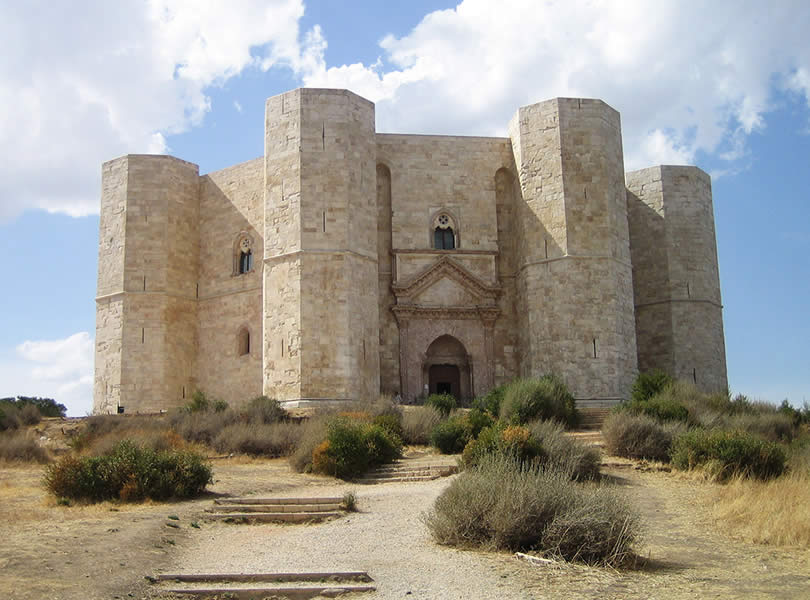 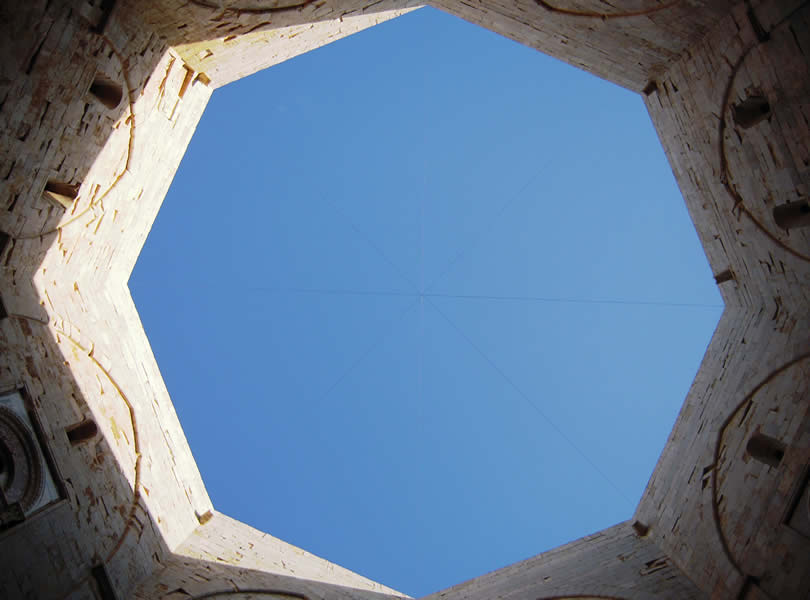 Get in touch with us and take part in our tours to Puglia to discover something more about Otranto and Castel del Monte!